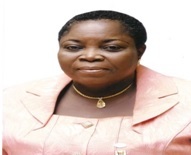 She attended various Institutions(OND) from College of Science and Technology now Lagos Polytechnic and was awarded Higher National Diploma, (Yaba College of Technology), Master of  Business Administration (University of Lagos), Associate Member, Chartered Institute of Taxation, Certified Information System Auditor (CISA), and Fellow of the Institute of Chartered Accountants of Nigeria (FCA). She was trained as Audit Clerk with OlutayoAdenekan& Co and Firm of Chartered Accountants. She later worked as Audit Manager with C.O Akinola& Co also a Firm of Chartered Accountants. She served her National Youth Service Corps with Lagos State Board of Internal Revenue(1988/89).

She also served as project manager with Akintola Williams Deloitte Auditing Firm on Capacity Building of Auditors on Information System Audit of the Office and also, discussant at the Institute of Internal Auditors Conference.

Due to her diligence, efficiency and effectiveness at work which has positively impacted on the success of the operations at the Office of the State Auditor-General, she was however given a letter of commendation by the erstwhile Auditor General (Mrs. O.M Akinwolemiwa). She has equally served in various adhoc committees at both local and state level.She wasalso given accelerated promotion to the post of Director, GL.17 with effect from 1st July, 2010 by His Excellency the Executive Governor, Mr. Babatunde RajiFashola (SAN)

Mrs. H.M. Deile is a member and fellow of many professional Associations in Nigeria and abroad, such as ICAN, CITN, and ISACA to mention a few. She attended many International conferences; she was also part of the delegate to International Federation of Accountants (IFAC) conference in Hong Kong, Turkey and Malaysia.

She is happily married to Pastor David Adelaja Deile and blessed with children.